I sometimes import audio clips into PSU, then later add a 'cover art image' using Mp3tag. Normally, if I rebuild the thumbnail in PSU, the art appears.

I tried that today on a FLAC file, but rebuilding the thumbnail fails to make the image appear, though it works OK on JPG files. (It also doesn't work on WAV files, but I don't use those so don't know if that's new behavior).

In testing this, I also discovered that moving a FLAC file - that already has a thumbnail - from one folder to another, makes the thumbnail disappear; rebuilding the thumbnail also fails to correct this.

As I upgraded to v7.1.5.4335 before working on the FLACs today, I suspect that there's there's a bug in the build?

I experienced no issues when processing FLACs with an earlier build on 1 May.
Top

People tend to give too much credit to small updates. All changes in a build are documented on the WhatsNew page

So if you have a file names VID0001.WAV then you can have a thumb sidecar file as VID0001.THM. This .THM file is a plain JPG file using the THM extension.
This is a user-to-user forum. If you need product support then please send a message
Top

Yes, I always read the What's New page, which is why I presume that this regression isn't intentional.

Never-the-less at some point in May PSU - or at least my installation of PSU - has lost the ability to read the cover art of FLAC files, and even looses thumbnails of existing files when moved (no .thm files involved).

An inadvertent code change is one candidate, but I'll happily test other ideas...
Top

What is the file name of your cover art file?
As mentioned it is required to use the THM extension if you want it to be a thumb file for PSU.

PS. A THM file is a standard jpg file with its extension renamed to THM
This is a user-to-user forum. If you need product support then please send a message
Top

There is no separate cover art file (THM or otherwise) - only the JPEG embedded in the FLAC file. 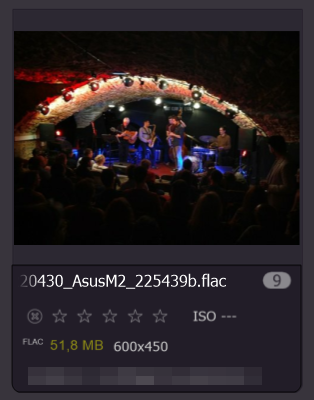 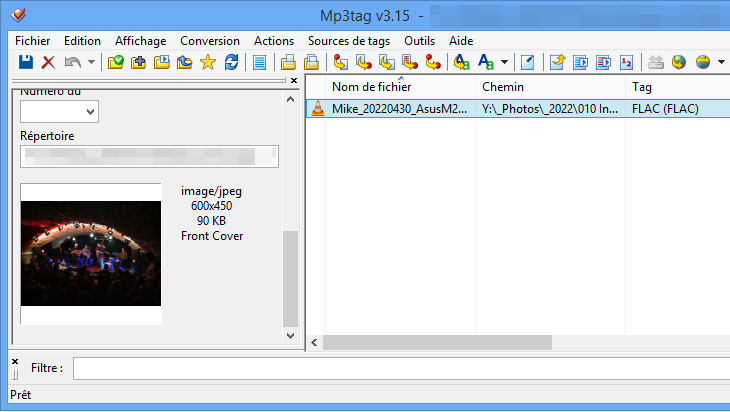 In ExifToolGUI, showing details of the embedded image: 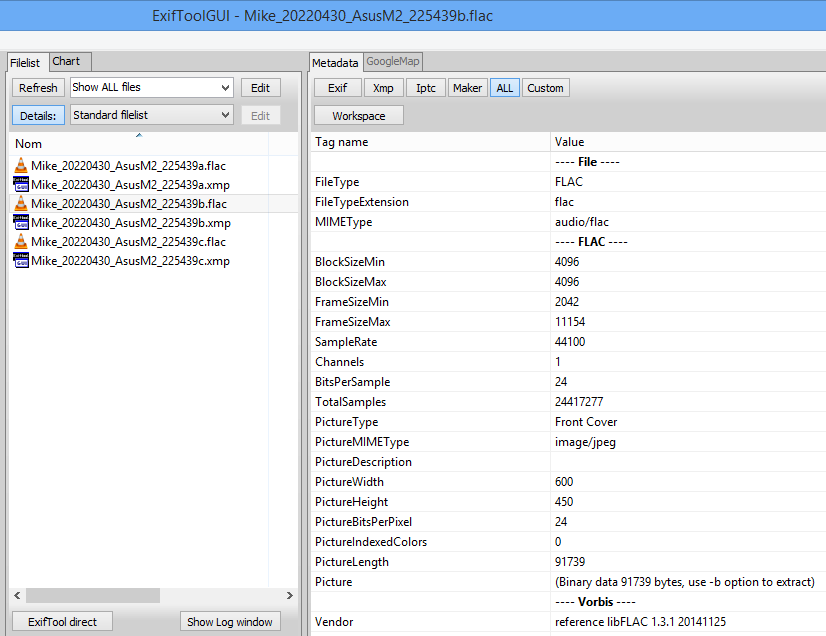 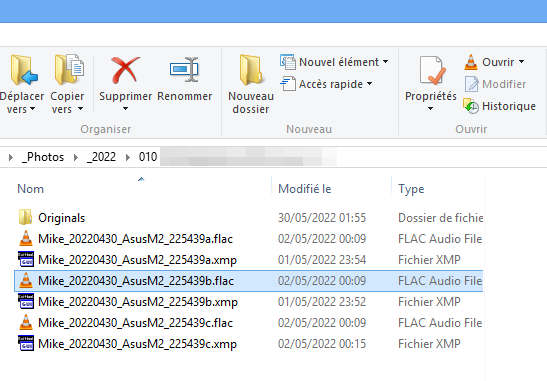 
Files 225439a and 225439c also have embedded JPEGs. They were displayed in PSU until I temporarily moved them to a different folder two days ago as part of my testing; that moved caused PSU to stop displaying them - the thumbnails vanished in a fraction of a second as I watched. I could probably video another of them doing it, if that would be of any help?

Intentionally or not, that hasn't been the case until now. They've displayed without problem in PSU since at least 2016 (the earliest I currently have access to).

Would it help to email a sample?
Top

PSU never had any support for FLAC files.

I think you have manually added the .FLAC extension as a "other format" in the preferences.
For such files, PSU asks the OS to generate a thumb. In short that comes down to: if you see a thumb in Windows Explorer then you can expect to see a thumb in PSU. Your screenshots show that you see the VLC icon for your FLAC files in Windows Explorer, and so I expect that in PSU you see the same.

A sample is of course always welcome. Would be nice to explore the format a bit more.
This is a user-to-user forum. If you need product support then please send a message
Top

Yes, .FLAC appears in the 'other extensions' list; I no doubt added it years ago. And yes, unless a FLAC file has an embedded image, then the VLC icon appears in PSU as it's my default audio player.


Hert wrote: ↑31 May 22 8:45 For such files, PSU asks the OS to generate a thumb... ...You may have had a Windows Explorer extension installed before that generated cover art icons for FLAC files in Windows Explorer.

Thank you, for building new thumbnails at least, that's the clue I needed! Interesting to know that that's how PSU generates its thumbnails.

I recently uninstalled Media Player Classic, which I've not used for years, originally installed through the K-Lite Codec Pack. Looking through the install options I spotted that the Icaros ThumbnailProvider Shell Extension is one of the options. Install that, and everything returns to normal

However I'm not sure why existing thumbnails within PSU's catalogue would be lost when moving a file between folders; does that cause the thumbnail to be regenerated? And if so, wouldn't disabling that regeneration give a performance increase? Or is that an unavoidable Windows function?

Anyway, I'll email a sample FLAC file for you to take a look at. Update: done.
Top

Interesting to know that that's how PSU generates its thumbnails.

Keep in mind that PSU only uses the OS for extension that you add to the "Other File Extensions"...in other words: for files that PSU doesn't know about natively. PSU does *not* use the OS to generate thumbs for the many formats that PSU supports natively.


Anyway, I'll email a sample FLAC file for you to take a look at. Update: done.

Thank you. i will have some fun with it. And maybe at one point PSU will add native support for FLAC thumbs. Keep in mind that when PSU adds native support you must remove the extension from "Other File Extensions" to remove the OS thumb generator for that extension.
This is a user-to-user forum. If you need product support then please send a message
Top

Is there a list of the Native file formats supported ? Just wondering if I've added any that aren't necessary over the years!
Geoff Mather (G8DHE)
Top

It is in the Quick Start Manual 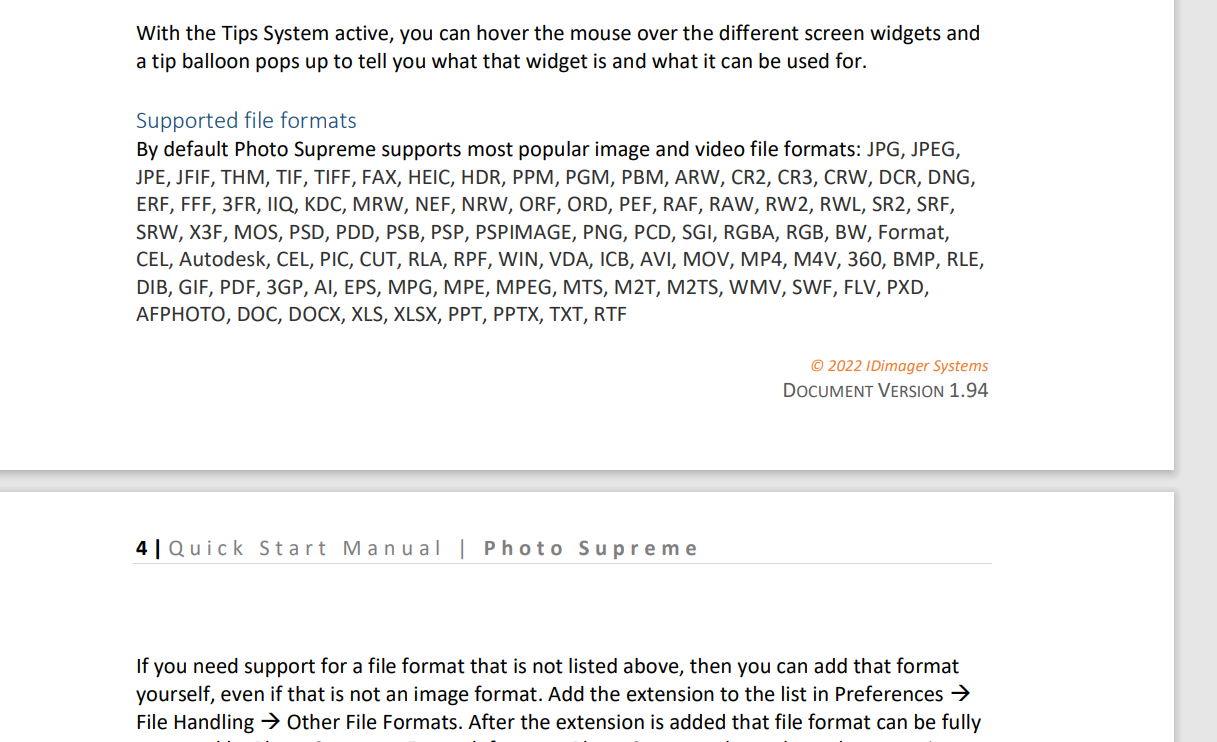 This is a user-to-user forum. If you need product support then please send a message
Top

Ha I did look thru the other sections but not the quick start! Thankyou.
Geoff Mather (G8DHE)
Top

..... ah now i'm confused .... Looking in the Settings|File Handling|Other File Extensions I have a long list including a lot but not all of the formats listed in the Quick Start, can I remove all the extensions in that list in order to get the native support, some I have clearly added myself (lower case), which now appear in the supported list, whilst others in Capitals I'm sure I haven't added myself do appear .....
Just checked against the original default database and the list is shorter but still contains entries that are on the supported list ?
I'm tempted to remove all "added" extensions, but don't want to have to re-enter them all if they are there by default!
Geoff Mather (G8DHE)
Top

Thank you Hert; the FLAC support in build 4353 is a great solution!

Great. Native support should be a multitude faster as well.
This is a user-to-user forum. If you need product support then please send a message
Top
Post Reply
14 posts • Page 1 of 1