When i destroy a stack or remove images from a stack psu seems to hang and becomes unresponsive.
I have to end psu and restart it to ho on.
Can anyone confirm that?
I am on the latest osu version.

How may images do the stack contains?
Are you on the single or server version?

When I managed to create stacks with 1700 images the PSu server version appeared to get stuck but the Postgres instance processed everything in the background correctly.
PSu Server 5 & Postgres 12 on macOS 10.14
- I'm the user
Top

Thanks gor your response.
I am on the server version with postgresql 11.
The stacks containn just a couple of images, typically 2 or 4.
After restart of psu the remove from stack or destroy stack indeed seems to be processed ok.

PSu seems to hang after remove from stack / desteroy stack because it becomes unresponsive.
I found out that PSu will recover after about 70 seconds, which is a lvery long time for destroying a stack.
Accoring to the States sheet I have 4468 items in stacks.

An attempt to convert the stacks back to version sets from States / Stacked gives the following error: 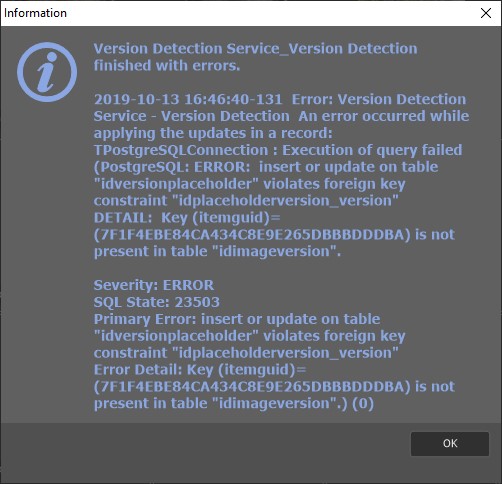 From a folder the function works fine.
Top

How many images are within the same stack you are trying to modify?
One stack 10 images?
or
one stack 1200 images.?


germie wrote: ↑
13 Oct 19 15:21
PSu seems to hang after remove from stack / desteroy stack because it becomes unresponsive.
I found out that PSu will recover after about 70 seconds, which is a lvery long time for destroying a stack.
Accoring to the States sheet I have 4468 items in stacks.

Unstack one photo (the last one) from a 1800 image stack.
PSu did think 3 seconds then unstacked it in a second. All done in 4 seconds.

I then selected the stack with 1799 images in together with the single image previously unstacked.
The stacking process needed the same process time as the unstacking but PSu now displayed all 1800 images as "Out of sync" and began running Synchronising service on all stacked images. That process took some time.

I redid this and it does the same.
0 Out of sync images before Unstacking.
0 out of sync after unstacking a single image.
1800 out of sync directly after stacking and Synchronising service starting up.

The stacks that I destroy are typically 4 images.
There are a total of 4468 images in various stacks.
I also see that stacking / unstacking images adds them to "out of sync".
I do not have automatic sync enabled; I have to start is manually.
Top

Hallo,
I can confirm that unstacking have a strange, but repeatable behavior:
- Unstacking a Image always makes PSu not responding for exactly the same time: 2:50 min after pressing the OK button to unstack.
- Than the OK-Info window is closed and PSu is exactly another 30 seconds unresponsive.
- The the Sync process starts, takes just seconds.
- After all this actions PSu behaves normal again

This behaviour is repeated for stacks of 10 to 20 pictures, not dependent of how many picture I mark to be unstacked

A warm welcome to the forum.
How many images are in your opened collection/set of thumbnails?
This is a User-to-User forum which means that users post questions here for other users.
Feature requests, change suggestions, or bugs can be logged in the ticketing system
Top

So it looks like it doesn't matter, from where I start an unstacking operation

Stacking/Unstacking takes a fraction of a second here (not surprisingly because stacking/unstacking is a very simple operation).

Since you get such long times;
1. Make sure that you compact your catalog
2. Make sure that your Catalog folder is not scanned by some virus scanner
This is a User-to-User forum which means that users post questions here for other users.
Feature requests, change suggestions, or bugs can be logged in the ticketing system
Top

The only thing that can impact performance here is Preference setting: Catalog->Stacking->Default Stacks Display
It is recommended to set that Default Stack Display preference to "Unstacked" (which is also the default). Loading thumbs to the viewer will be 9 times faster when set to "Unstacked" compared to "Stacked".

Try this:
1. IMPORTANT; Close all tabs
2. Open a folder that has stacks in it
3. Stack/Unstack the images

How does that perform? Is it still slow? If so, can you post a full (not cropped) screenshot of Photo Supreme from *before* unstacking? That could provide some insight.
This is a User-to-User forum which means that users post questions here for other users.
Feature requests, change suggestions, or bugs can be logged in the ticketing system
Top

Some update about improvements based on Herts recommendations:

Remark:
test were also performed in MacBook started in Safe Mode, meaning no start items are activated like virus scanner or others ....

Compacting the Catalog only (not thumbnails):
- the response time ( Time 1: --> closing dialog box) is reduced from 2:50 to 2:20
- 2:20 time is constant for every unstacking action, independent from the number of pictures to be unstacked
- no difference if the stack is shown in the tab as "one stack" or separate pictures with the stacked symbol
No problem any more with:
- the additional delay before of about 30 sec when Sync starts is 0 sec now
- creating a stack is now immediate (before 45 sec)

So no difference in principle which way around you create the stacked view of the thumbnails, but for more convenient browsing the unstacked view is much faster, especially when switching tabs. Even if I would like (and was used in Aperture) to hide as much as possible (less important) thumbnails in stacks to have a better overview for the more important pictures. But it looks like is is slowing down the ease of use.

Unfortunately I was running into another problem following Herts recommendations (sorry for that Hert):
After importing 50.000 pictures PSu created a thumbnail DB of 50 GB, eating most of my disc space, only 40 GB left.
When I asked for compacting the thumbnails, I was told I had to clean up disc space first.
So far so good, fully understood the need for space.

So I cleaned up the disc (removed Aperture), freed about 400 GB of of disc space. Mac OS confirms this.
But PSu still claims that to little space is availible, reporting the old numbers in the dialog box (50GB/40GB).
Neither restart of PSu nor restart of the MacBook helped to make PSU aware of the freed disc space.
Any Idea, any help?
Martin Grischke (Space42)
MacBook Pro
Top
Post Reply
25 posts