I've been a Photo Supreme user since V3. I keep paying my $150 every 18 months to upgrade, but I'm just tired of the "Application Not Responding" constant problems I have. I get them all the time when trying to import even a few hundred photos. So I thought, "OK, I'll give V6 a shot. Maybe things will actually be different."

But no, I just downloaded V6, tried to import some images, and when I click on the little drop-downs at the top, all that happens is that the window bar grays out. Then I tried moving my window from one screen to the other and I got an exception (which I sent along).

Restarted. Got the import running. Now this. It's not responding and both the Synchronize Service and Building Thumbnails bars are frozen. It's ~500 images. 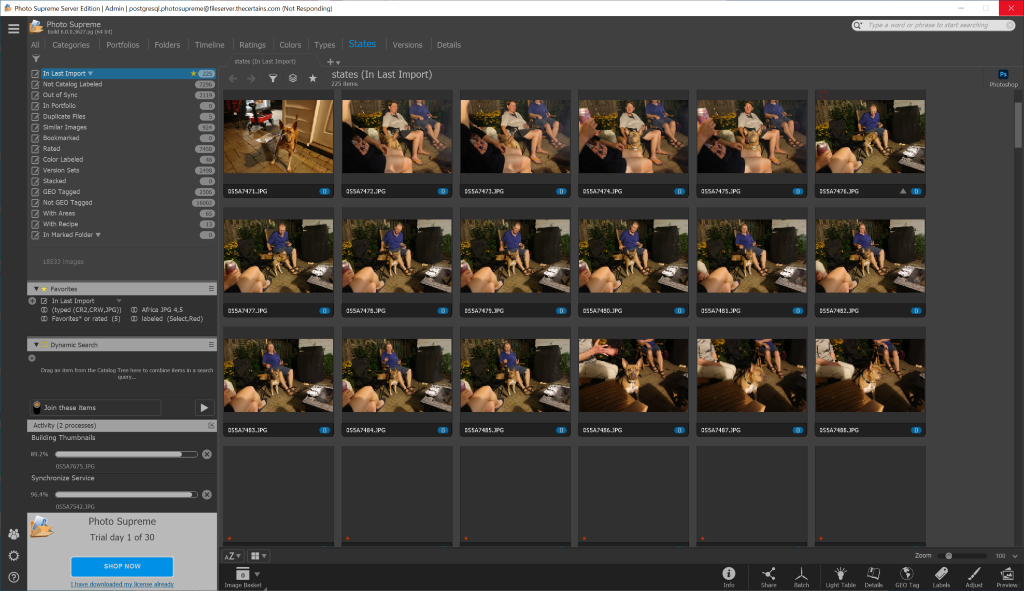 Restarted. Started another import. Came down to check on it and PSU had crashed/exited. Just not running any longer - no record of what happened. I really like the promise of PSu. I picked it when iView went under because of the promise of PSu, that it works on Mac/Windows, that it's open, etc. But I spend as much of my time trying to work around problems as getting work done. It's just so frustrating.

Am I really the only person constantly getting crashes and freezes?

V6 is very solid, especially the PostgreSQL version that you're using. Most likely you have an image that somehow chocked PSU.
Try to narrow the set down.

Select half of the set, press Ctrl+Alt+S to manually read metadata, press CTrl+Alt+T to manually update thumbs
Then repeat for the other half.

Is there a half set that stalls, then slide and dice that set further until you found the image (or images) that brings PSU to its knees.
Once you found a file, then please send me a copy.
tia
This is a user-to-user forum. If you need product support then please send a message
Top

Is there some way to get a core dump when it crashes? Because now I'm in the state where if I try to verify files and folders it just runs for a while and then crashes/exits silently. I'll try to figure it out with the imports as well.
Top

With a "poof crash" (meaning the software just vanishes) there is no way to dump anything as everything just vanishes.
Did you do the test I asked you to do?
In your screenshot you have a set of about 250 images. Slice and dice to find a possible culprit file should not take long.
This is a user-to-user forum. If you need product support then please send a message
Top

I understand the logic behind the slice and dice approach to fault finding but it should be possible to approach this type of problem in a more logical way. Most applications have a logging capability, doesn't PS6 have this too? I understand that logging has a performance overhead but it should be possible to only enable it when required. This type of fault would be easier to diagnose if you looked in the log file and the last entry before the program crashed read "Starting to import <image path>"
Top

PSU also has a logging option. Ctrl+Alt+Shift+D creates a log file in your app data folder. Keep in mind that the log file size will be massive if you don't know what specific module to debug. When you enable the logging then close PSSU and delete the massive log file.
With 10ths of background threads running concurrently a log file is not as easy as "go to the last line and there's the error". Slide and dice in this case will be easier.
This is a user-to-user forum. If you need product support then please send a message
Top

Thanks for the logging information Hert. I might have guessed it would not be so simple.
Top

Hert wrote: ↑
23 Mar 21 2:18
With a "poof crash" (meaning the software just vanishes) there is no way to dump anything as everything just vanishes.
Did you do the test I asked you to do?
In your screenshot you have a set of about 250 images. Slice and dice to find a possible culprit file should not take long.

I think the problem may have to do with how you handle display change events. I kept coming back to my computer and PSu would just be gone, and I also had gotten crashes moving the window from one screen to another. So I started the import and disabled the display timeout, and it all imported. I'm now starting a full-folder verify of my entire catalog and will let that run overnight.

But I think that there are challenges with window change events. I've gotten an "Application Exception" window a few times. I sent the exception to you the first time - something about the drawing area being outside some bounds. Also, when PSu is on my second monitor, none of the pop-up menus work (such as the three at the top of the Import selection window, or the one that pops up a calendar when you click to the right of a date).

I just tried it here with dual monitors, both running at different resolution, both running with scaling enabled (first is a 4K monitor, second is a 2K monitor). No issues with positioning the drop downs that you mention when PSU is dragged to the second monitor

Below are my display settings of both monitors (latest Windows 10 version 10.0.19042.867). Maybe you can also show your display settings. And check if perhaps your video drivers are giving you issues.

This is a user-to-user forum. If you need product support then please send a message
Top

Well, when I came down this morning, PSu had disappeared, even though nothing had changed with the screen. So that's not it.

Then that brings me back to my original question. All the signs are there that there's a file somewhere that kills PSU.

A. Either slice/dice when you find a set of images that always crashes...or
B. start with a new catalog, import a (sub) folder, wait for it to finish, and continue until you find a folder that kills PSU. Then slice and dice that folder.

PS. Also try to disable all editor (Lightroom/C1/DXO) support in Preferences (File Handling). Could also be that there's an editing set somewhere that kills PSU
This is a user-to-user forum. If you need product support then please send a message
Top

OK. I will start that process. May take a while, since for the first few rounds I'll probably do them overnight. There's another issue in that PSu shows my root folder twice, but one doesn't show any image totals. They are exactly the same path when you hover over them

I'm afraid to remove the second one as I don't want to have it just remove everything in my database, but it's at the least annoying to have them both there and at worst indicative of something wrong in my database (could this be the source of the crashes?). 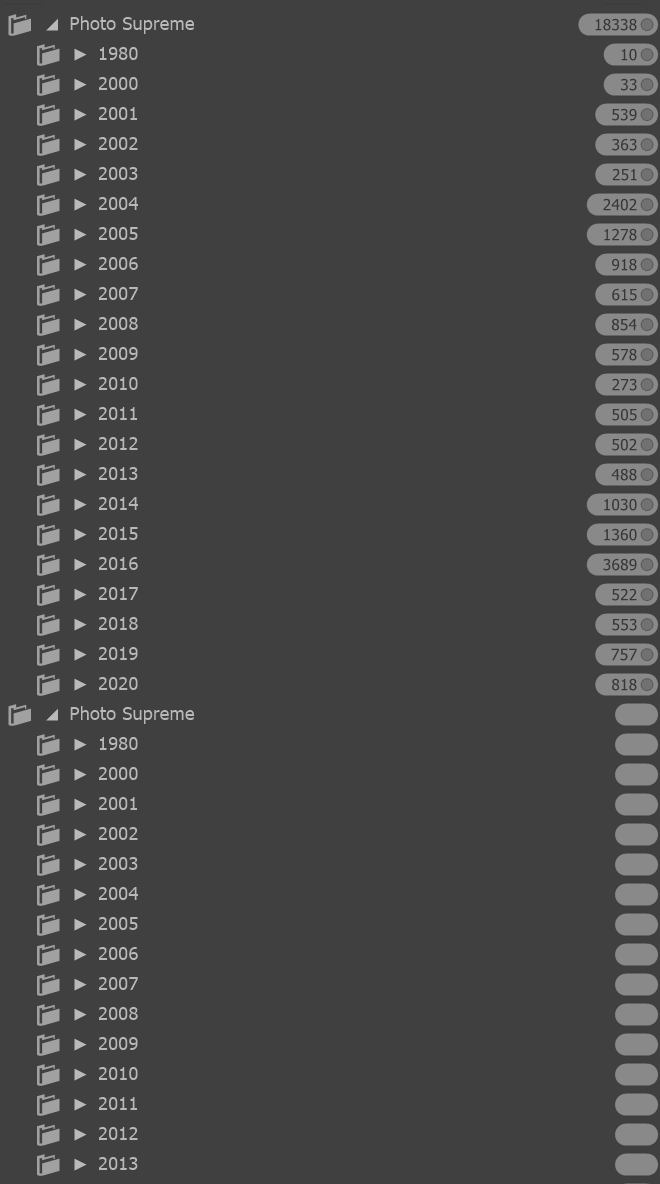 acertain wrote: ↑
24 Mar 21 6:44
OK. I will start that process. May take a while, since for the first few rounds I'll probably do them overnight.

Don't do it with your entire catalog. Find a small set that gives you issues (like the one you showed in the screenshot of a few hundred). Then do the slice and dice. Shouldn't take long to do that on such a small set.


I'm afraid to remove the second one as I don't want to have it just remove everything in my database, but it's at the least annoying to have them both there and at worst indicative of something wrong in my database (could this be the source of the crashes?).

If you're afraid to remove the second then make sure you have a backup of the cat.db file so you can always revert if needed.

To resolve this; right click on one of the two top level folders and untick the "Make this the root folder". Is there still a duplicate? In that case right click on the top level folder and select "Map to the correct physical path". Repeat that for the duplicate.
If things don't work out then restore the backup
This is a user-to-user forum. If you need product support then please send a message
Top

Sorry I've been unresponsive. I noticed when I was doing all this PSu work that the server where Postgres and the file shares are running was struggling to keep up when I ran these big operations (big load average spikes, swapping, etc). It was due for an upgrade anyway, so I rebuilt it with more RAM and SSDs, hoping that maybe the instability was on the server side.

Unfortunately, it was not the problem. I just restarted the verify and again got a poof crash. The reason I don't think that it's a particular file is whenever it crashes, when I restart the import, selecting the files that didn't get imported the first time, it will proceed, and I have always been able to eventually get all images imported.

So now I'm back to binary searching with the "Verify All" operation. I'll let you know how that goes. I also had to backup my entire PG database as part of the move, so now is a great time to try what you suggested below, since it'll be relatively easy to revert.

OK. I unchecked them and one was mapped to \\server\path and the other \\server.domain\path. So they were both pointing to the same thing, but also separate. When I split them out, they had different counts of photos. One only had a few hundred, so I just deleted those and am now doing a verify to bring them back in. The previous verify did die somewhere around where these two paths both had sub-folders in common, so maybe that's the problem.
Top
Post Reply
38 posts