Is anyone aware of an external viewer (preferably free

) that can highlight the xmp:mwg-rs regions and display the associated names ?
I've been trying a few of the common ones but none seem to support the feature (XnView, FPV, FastStone)

That's not really an option in this particular use, as there are a lot of images and was thinking of making a Zip of the files for the identified person to peruse at their leisure of all the races they had been in over a year. The idea was to include a viewer in the package as well or point to a site to download.
Geoff Mather (G8DHE)
Top

In a similar situation I've used PSU's 'Print' function, which can be configured to show face areas, to output the files as PDFs.

If you really want JPGs you could run the PDFs though an image extractor. Though not sure that you'd gain much.
Top

Ah, all is not well between TagThatPhoto and PSU

Having used TTP on a couple of years images and re-reading the metadata back into PSU all seems well, PSU picks up the names and adds them to previously created names and displays the regions and data happily.
However I had reason to Verify a few directories yesterday and ended up with some oddities, Verify identified files needing importing, and all proceeded quite happily, until after the final Sync process had completed, at which point there were a number of un-synced files left behind - odd, re-synced them again and they appeared to go away, however just to be certain I Verified the folders again and differences re-appeared .... repeated the cycle and exactly the same happened, all seemed to update, but un-synced files remained, re-write them and Verified yet again and the differences returned

Checked on a folder that TTP hadn't touched and all behaved as expected, differences were corrected and remained corrected.
It seems without further checking that PSU doesn't write the data back in the same way that TTP does and so sees differences, possibly (but not proven) in the xmp:mwg-rs data perhaps ? No error messages appeared at any time, just that PSU thinks there is a difference between what it has recorded and what is in the file itself.
Any ideas Hertz ? I can make some files available if needed.
Edit: Seems more to it than at first sight Versions/JPG/RAW files seem to have an influence .... more digging needed!
Geoff Mather (G8DHE)
Top

Worth trying 'convert data to XML', if you've not already done so, then reading the metadata from file.
Top

Yes I have tried that, but at present its not a complete answer, or at least there are still oddities kicking about.
Its not helped that I have used TTP on all the images so far in 2019 some 48,000+, and those have been re-read into PSU (also TTP on 2018 but not re-read those yet!), its only when I needed to use Verify on some small subsets that the oddities noted above have started showing up.
Anyway I am slowly starting with a much smaller subset and a new test database to see if I can pinpoint just what is being affected and how!
Geoff Mather (G8DHE)
Top

Had an email discussion with the TagThatPhoto people,it seems that;

Yes, there is a free viewer that will be able to show people tags etc. after the next release (later this month). It is called XnViewMP. It displays all kinds of tags. The next release will be writing tags in a few other IPTC fields so that other programs can more easily display the tags. Note - the new tags will show up in Windows Explorer also.


In a future version of TTP, we will be adding a slide-show sharing service. This will allow you to create a slide-show from a set of pics, upload to the cloud, and share a link with friends and family. The slide-show will show the people tags. This slide-show link will expire after 90 days for privacy reasons.

Now I had read this before so had installed XnViewMP but it wasn't there a month or so ago, so lets hope it arrives soon!
Geoff Mather (G8DHE)
Top

Just an update the latest release of https://www.xnview.com/en/xnviewmp/does now allow viewing and display of regions. Its not the most convenient to use as only once the image is displayed does the "View" menu allow selection of the display option, but then it remains on till the window is closed; 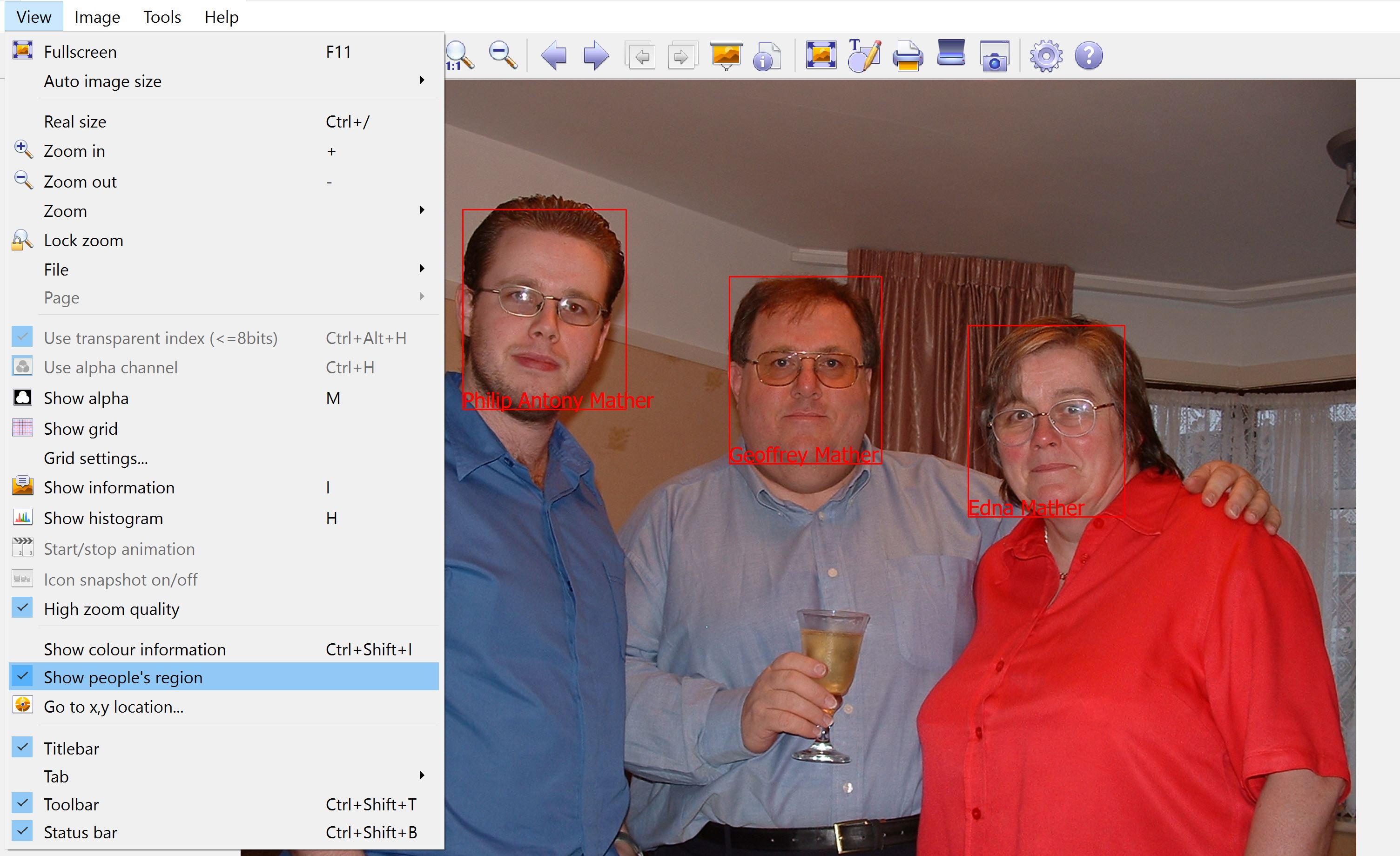