After a long time off with photography and PSU I wanted to get back and now I stumbled over a few problems.

First problem is that I get a script error and then a for development purposes only map.
Anyone else who ran into that problem?

I did create a new API key to make sure it is not the key and verified it is the correct key! 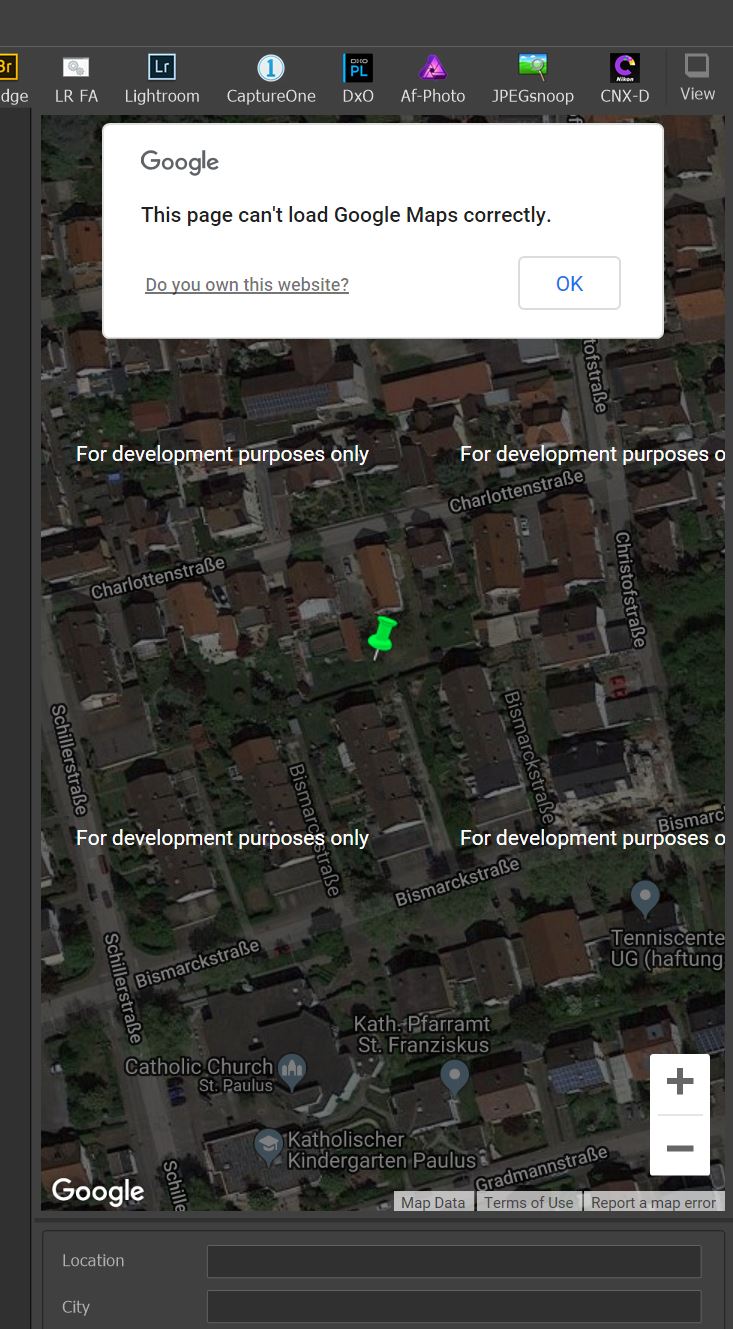 here a screenshot from the script error

Hmm. Mine hadn't been working for some time, despite adding the keys. Today, I was getting an error message, IIRC both on the getag panel and on shift-G (display on map). As I was getting a bit fed up I looked at the whole issue again, and checked out the idimager youtube vid on the subject. But everything appeared to be as it should be. I re-copied the key and re-pasted in PSU - though it hadn't changed - and then it partially worked. After a restart of PSU it seems to fully work. Well, at least apart from the "For development purpose only" watermarks on the maps [edit#1 - watermarks are only on shift-G, not in geotag panel]... so I have no idea what has been going on. But I suspect Google. I always do. If in doubt, suspect Google!

Thanks Snowman for your response!
I also watched the video to double check and I even created a second api key and copied it into the appropriate field.
The error message appears every time I start PSU with a geotagged photo selected.

I suspect google too... (because I believe it worked some days ago, when I started to update all the software on my PC)

I'm not sure - but your screenshot - did you enter your credit card?

Hi ,
I also get the same script error message from time to time. After clicking "OK" to continue the map basically is fine. I do not see the development marking on the map and reverse lookup also works fine. But I am no longer able to retrieve altitude values. Clicking the relevant button seems to do nothing at all.
I have double checked myAPI key. Key and billing are basically OK.
I have already opened a ticket in Mantis (0003301) regarding the script error. Hert meant I shouldn't bother about the message box.
But the issue regarding the altitude is pending.

This is why you see "for development purposes only"
Top

Just found the answer (I googled) - 'google maps is no longer free' - That's what I just read!

I had exactly the same problem myself and ... well without credit card nothing works
Top

Tip; after adding a credit card, also set billing restrictions. And most important; make sure to never expose your api key to others.
This is a User-to-User forum which means that users post questions here for other users.
Feature requests, change suggestions, or bugs can be logged in the ticketing system
Top

Giving Google my credit card details is absolutely the last thing I want to do. While it's understandable that they charge for bulk usage it's frustrating that they are enforcing cc entry for everyone instead of just those who do or want to exceed the free limits.
Snowman1
http://www.flickr.com/photos/snowman-1/
--------------------------------------
Top
Post Reply
41 posts