I posted an issue to Mantis today.

I use Photoshop CS5 (because it's the last version with a perpetual licence) and it includes Adobe Camera Raw 6.7 ("ACR6.7"). That hasn't been updated for about 5 years, so it doesn't support new cameras. So, as suggested by Adobe, I convert raw files to DNG using Adobe's DNG converter, with the compatibility setting for ACR6.7. Problem solved. But not all problems, apparently.

I import the files into Photo Supreme and convert to DNG along the way. At this point, all the Exif I'm interested in seem to be in Photo Supreme's database and in the DNG files since they are synced.

When I send the files from Photo Supreme to Photoshop for processing, ACR re-saves the DNGs. Then I need to use ctrl-alt-s to import the updated metadata (including the ACR settings for the file). And at this point, Photo Supreme Info panel and Details panel no longer show most of the Exif info. Fields such as camera model and date are now blank. I never noticed this until very recently! (Perhaps because I mostly work in folder view and mostly sort by filename, and I usually have the label panel open rather than those other panels.)

Hert suggested in the Mantis ticket that I try "Convert metadata to XMP" which is an option in Photo Supreme's collection viewer [context menu] -> [metadata]. And this worked.

So now I wonder - are my settings wrong for metadata? How does "Convert metadata to XMP" interact with the database read/write options for metadata? 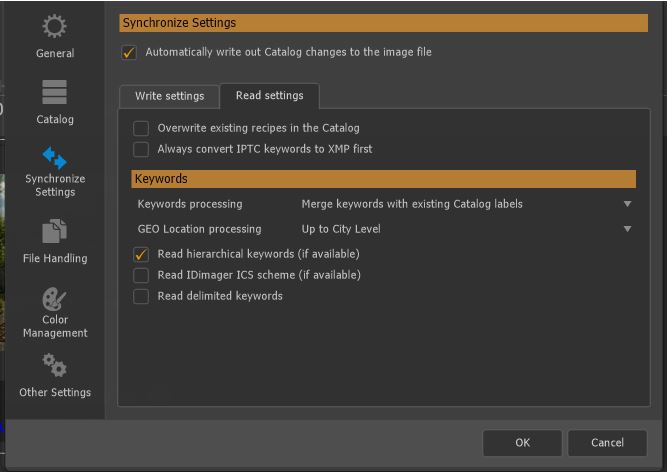 The attachment Metadata read settings.JPG is no longer available
Top I forgot to say:

The files converted from raw to DNG have the exif data shown also in the xmp.
But after such a file is processed by ACR, some information is no longer in the xmp but it seems it's still in the exif.

So, presumably ACR reads in the exif info from either exif or xmp, but re-writes the metadata from scratch and does not output this info to xmp. Would that make sense? I am just guessing!
Top

Thanks to Hert who added some more helpful info in the Mantis ticket:
https://mantis.idimager.com/view.php?id=3274

I'm still interested to know if anyone thinks my settings look dangerous (as per my question of this thread), but I guess whatever happens I have to figure out what to do to reduce the risk of accidents since ACR6.7 is not doing what I'd want with metadata. Upgrade Photoshop, or develop a more rigorous process to compensate for this issue, or ... ... ...
Top

It looks like something I encounter frequently in my own (rather atypical) workflow.

I use Adobe Lightroom 6, with DNG-files. When I want to adjust a DNG from PSU (3), I do the following:


Would have loved an option to do the "convert metadata to XMP" action automatically.
- no previous experience with Idimager whatsoever...
Top
Post Reply
5 posts • Page 1 of 1