I've just upgraded my Photo Supreme from ver 1.9xx till ver. 2.0.2.1021. Everything in the upgrade worked fine. However, now when I open the new Geo Panel, I get the following error message: 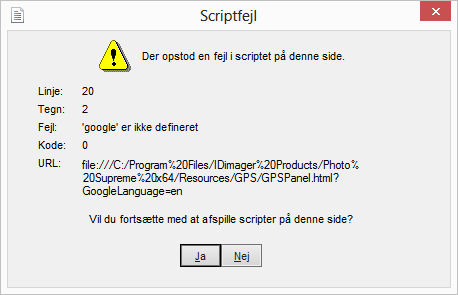 If I choose to run the script, the panel opens without google map loaded in the lower window of the panel.

How do I make the panel work?

Some things that come to mind;
1. You have Javascript switched off in Internet Explorer
2. You have a firewall that blocks PSU
This is a User-to-User forum which means that users post questions here for other users.
Feature requests, change suggestions, or bugs can be logged in the ticketing system
Top

You are right, running scripts and ActiveX-components are restricted in IE.

However comparing, IE-settings on a PC WIN7 IE v. 11, which runs PSU ok and loads google map in the lower window of the panel,
to my PC WIN8 IE 10 which dont open the window, gives no explanation.
Settings in IE's are exactly identical.
My firewall is nor the problem.

Are you able to give me any ideas to ajust settings in IE v. 10?

Hmm, I really don't know how IE works anymore...I stopped using it at version 6. However, IE is the component that all applications use to embed a browser component, simply because it's installed on every Windows computer.
Maybe someone else here knows how to set the correct settings in IE 10. Also, isn't there a IE11 already?

Hert
This is a User-to-User forum which means that users post questions here for other users.
Feature requests, change suggestions, or bugs can be logged in the ticketing system
Top

Something a bit odd with Chip's setup: a Windows 8 PC should be running IE11 by default, not IE10. Certainly a Windows 8.1 PC will have IE11 installed out of the box. Perhaps Chip needs to do a Windows Update and install IE11 on his Windows 8 system.

I'll throw this in just in case it helps somehow. I hadn't used IE in quite a while until recently when I upgraded to Windows 8.1 and wanted to have access to IE in the "modern UI". To do that, you have to set IE as your default browser (not happy about that but I'll try it for a while). I made that change a couple of weeks ago and had a lot of problems at first trying to do simple things in IE. For example, viewing or downloading pdf files. I found that I had to disable "Enhanced Protected Mode" in order for everything to work correctly again. Disabling it was fairly simple once I found the correct place in which to do it. I won't try to tell you how to do it since I'm running a different version, but I believe enhance protected mode was introduced in IE10 so this might apply to the situation being discussed.

Strange - I haven't noticed any hurdles placed in my way of downloading or viewing. There certainly was an issue with RSS feeds in the Desktop version of IE11, but that has been resolved by an update from Microsoft.
Geoff Coupe
--------------
Photo Supreme /Windows 10 Pro 64 bits + Windows Home Server 2011 = DAM
Top

I think it may have had something to do with Adobe's addons for IE being 32-bit and IE11, with enhanced protected mode enabled, won't run 32-bit applications. An example of what I was seeing is when I logged into one of my credit card accounts online and tried to view a statement, A new browser window would open but it would be blank. It was real annoying because that site didn't offer any other way to view that statement. If I'd open it Firefox everything just worked. Since I disabled EPM, I haven't experienced that problem.
Tom Stoddard
Top

Thank you for your kind help and comments.

For the moment I am running a setup, PC WIN8 IE 10, which has stability and causes no troubles at all except not running GEO Panel in PSU, for that reason I am staying to my setup and use GeoSetter for the codejob, hoping a good idea shows up on User to User Forum solving my problem running “GEO Panel in PSU on PC WIN8 IE 10”

Although this is an old issue, I have only just used the GEO tagging facilities for the first time, and I encountered the same problem that gave rise to this thread (i.e. script error - 'google' not defined). After trying several things I eventually got round the problem, although it seems illogical, so in case it is of help to anyone else....

I am running Win 7 (64 bit). I have IE11 installed, but don't use it. The PS script error only disappeared when I unchecked the "Enable Protected Mode" option in IE (Internet Options, Security tab, Internet zone settings). Having done this, IE told me that my computer was at risk. Obviously I don't like that, so having established what was causing the problem in PS, I reset "Enable Protected Mode" in IE, and planned to complain that PS would only work when my computer was at risk! However, having re-started PS it now seems OK, even though IE is back in the state that, apparently, was previously interfering with the PS Geo facility. Computers are supposed to be logical.....
Charles Hebert
Top

My preceding post was premature. PS worked fine for 48 hours, but today the problem returned, and disabling Protected Mode in IE11 didn't cure it, so I suspect the issue is also influenced by something else I've been running today. I left IE Protected Mode disabled and re-started my machine; right now PS is OK, and I've set Protected Mode in IE with apparently no ill-effects.
Charles Hebert
Top

chuckhebert40 wrote:However, having re-started PS it now seems OK, even though IE is back in the state that, apparently, was previously interfering with the PS Geo facility. Computers are supposed to be logical.....

Computers?...logical? Perhaps that's a flawed expectation, or perhaps computers are actually too logical - at any rate, they more or less often appear to us (mere mortals and imperfect logicians) as stubborn, moody or unpredictable. (Not unlike humans, one might add.)
Top

Having disabled IE Protected Mode my system worked for another couple of days and then failed again. I eventually traced the problem to another piece of software which was behaving like a firewall (although not identified as one). I've re-set IE Protected Mode, and everything's been working for several days - long enough for me to find some other issues with GEO tagging (separate post). The fact that the behaviour wasn't consistent for more than two days at a time is of course not entirely logical......
Charles Hebert
Top
Post Reply
13 posts • Page 1 of 1