weidmic wrote: PSU is the software I use to download my images from card, rename, Convert to DNG, Tag, add metadata, add GPS, sort, make collections, ect. ect. ect.
LR is my RAW converter of choice and I use it to export my images to JPG when needed (for clients, facebook, etc.)

My workflow exactly as well... though I do use LR a bit more as I like its print module (for building multi-image output templates to 8x10 paper, GPS [though now added into supreme, I'll probably move this back into doing this pre-edit], gallery creation [using Piwigo plugin]). Export (as needed) can be done in either program, though it really just depends which I reach for first... typically supreme since I would be using it to navigate and locate the image.
Check out our detailed DAM reviews at http://www.DAMRoundup.com
Custom designed books for publication or personal enjoyment - http://www.JingotheCat.com
Top

weidmic wrote:Andy:
A bit Off Topic: I would like to use PSU to export my images, however, I have not found any settings that are comparable to the output quality of LR - can you share your experience?

Hi MIke - I haven't done an in-depth comparison between the too but have setup an export preset in Supreme for uploading to my Piwigo gallery - it consists of sizing to 2048 using Lancos, a script for the rename (check for title/headline otherwise use filename), 25% sharpening and a watermark)... attached mini sample version below... I think it looks pretty good and like the quickness of the export and flexibility of the share function. 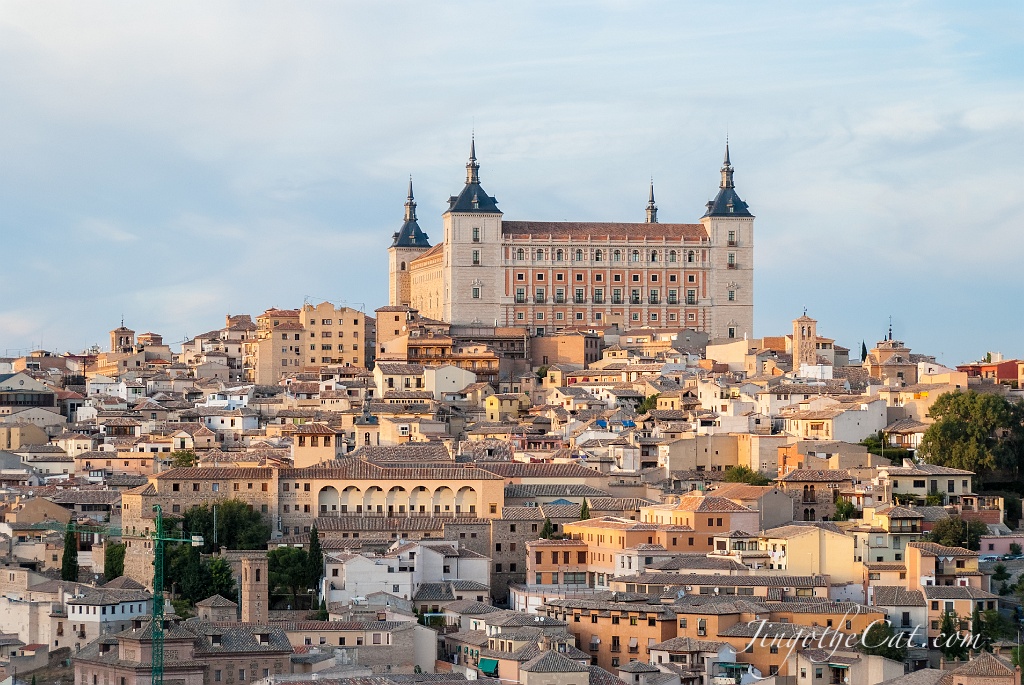 Please help me to understand. Since you are using DNG files, when you want to upload or export and image from within PSU, do you have to tell PSU to convert to jpg on export or are you creating a jpg first and exporting that file?

The reason I'm confused and the reason I assumed that you would use Lightroom for this sort of functionality was that you don't need to create jpg's when using Lightroom. You can process your raw file, save the settings or recipe or whatever you call it inside the DNG file and then generate the jpg "on the fly". I assumed that "on the fly" meant at the time you export, upload, print, etc. My understanding it that, since PSU isn't really a raw processor, it won't create the jpg from the raw file, it will only use the jpg preview that is in the file. If you need to create the jpg in LR first and then go to PSU to export it, that doesn't seem very efficient.

What am I not understanding?
Tom Stoddard
Top

Hi Tom - well - it depends on what I'm doing. If I was going to email or FTP the file directly to my server, then I wouldn't need to create a JPG first... I could just select the DNG and use an FTP export in Supreme to do the work. If I was going to upload the file manually, then yes.. I would need to export the file first.

When I am all done editing a DNG photo in LR, the last step I do is Update the DNG Preview. What this does is take all the edits I've made in LR and embed them as a JPG inside the DNG file. This allows Supreme to see an update to the file and it will update the preview in the database. When I then run any export operations in Supreme, it will use this updated preview to perform the export thus mimicking the same steps inside LR.

So - there aren't really any JPG exports being done in LR... just updating the preview which is why DNG is a very nice option when using LR + another DAM application... otherwise, you would need to export the files as JPG's and use versioning to link them to the originals in Supreme...
Check out our detailed DAM reviews at http://www.DAMRoundup.com
Custom designed books for publication or personal enjoyment - http://www.JingotheCat.com
Top

Well.. just completed a quick experiment and I am getting the same results that I have in the past...

So - here is what I did:
1 - installed Supreme on my MAC
2 - imported a single DNG image into Supreme from disk (was already converted)
3 - used Open With.. Lightroom to import image into new LR database
4 - made crazy edit to DNG file (black and white/overexposed) and used the Update DNG Preview and Metadata to update the DNG file

Was hoping that a) the thumb would be updated automatically in Supreme and b) had hoped that OSX would have been able to use the embedded previews.... funny enough - some of the other software viewers I have on the MAC doesn't support that either (Xee3).

Screenshots below.... thoughts? Thanks - Andy. 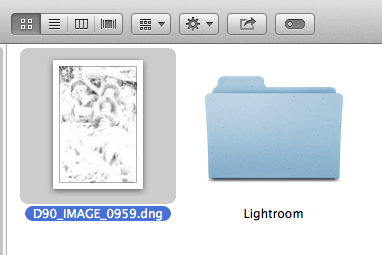 
Preview in Finder does not use embedded DNG preview apparently: 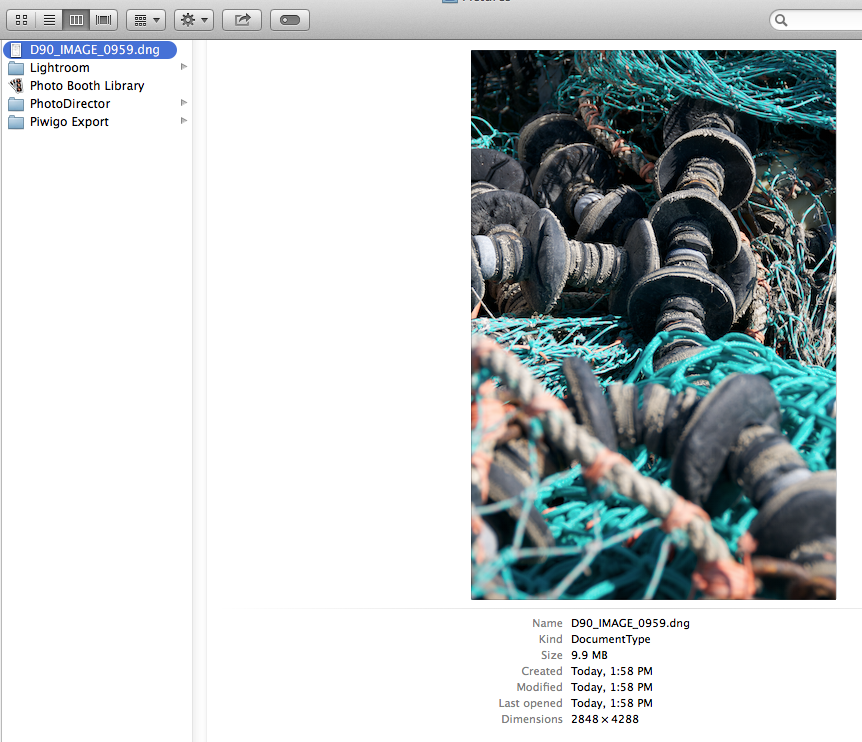 
Supreme thumbnail not updated even after Forced Rebuild: 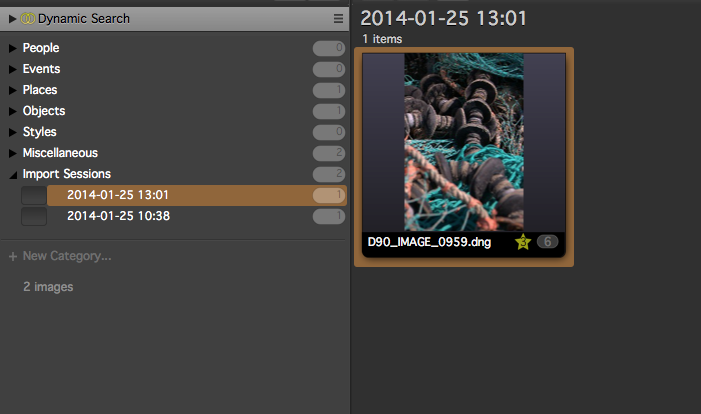 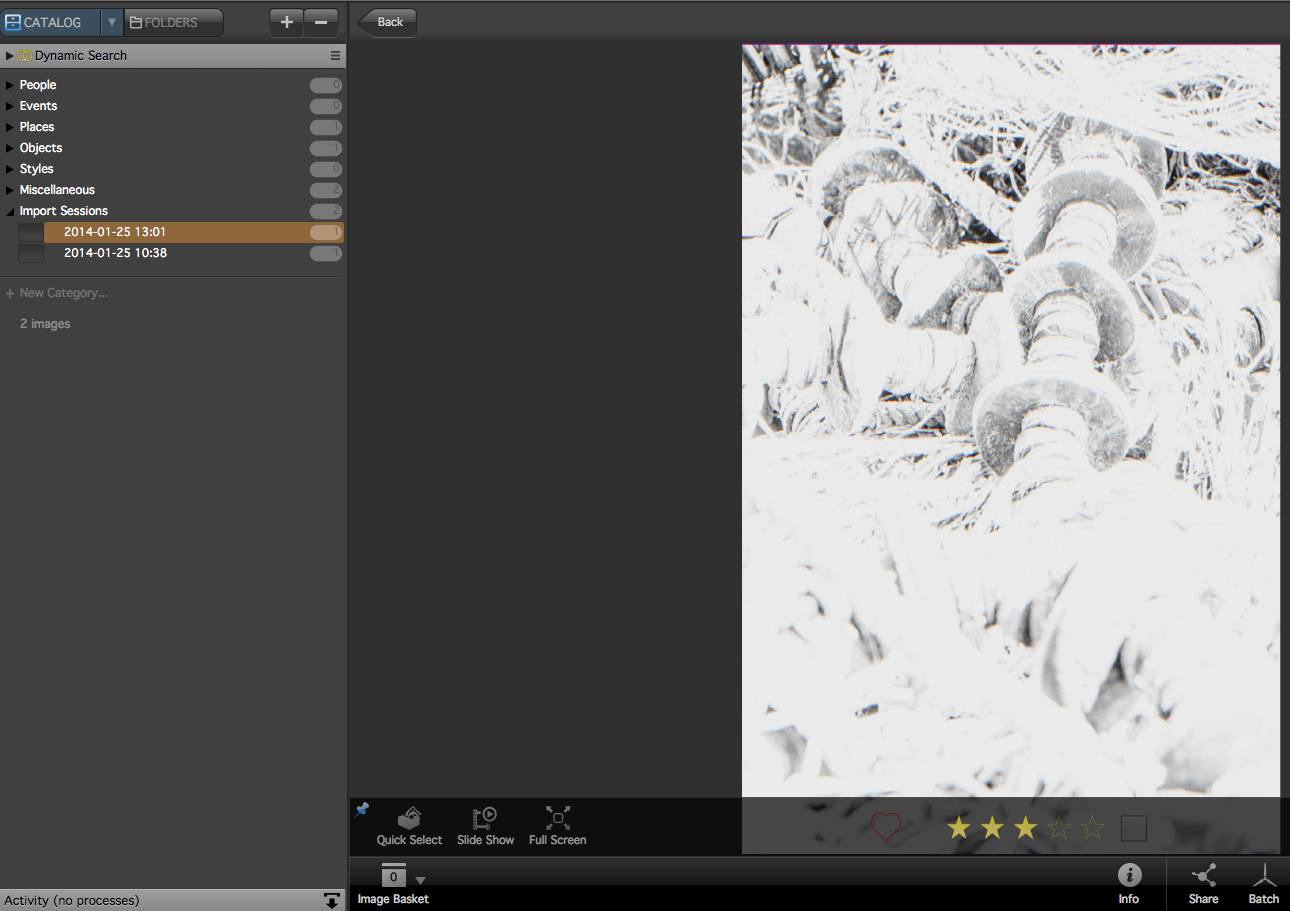 That confirms my findings on my Macbook Pro. I have a request on Mantis on this.

Although the thumbnail did not change after importing LR edited/DNG updated image into PSu, the image had indeed changed! In fact I was not able to rebuild the thumb on the mac period...

But is works perfectly on my Windows 8.1 - 64 system. I have a comment saying this somewhere on this forum...

And I posted the bug on Mantis. Will have to check for any further comments there...

Thanks Dick... glad to know this isn't something isolated to my system! I found the mantis bug (http://bugs.idimager.com/view.php?id=1915) and added my own findings to it as well.

My thanks for confirmation... until this is resolved, I won't be able to perform any more detailed LR/Supreme DNG testing to ensure things are flowing between the 2 correctly - at least on my MAC. - Andy.
Check out our detailed DAM reviews at http://www.DAMRoundup.com
Custom designed books for publication or personal enjoyment - http://www.JingotheCat.com
Top

andy@damroundup.com wrote:When I am all done editing a DNG photo in LR, the last step I do is Update the DNG Preview.

What about Lightroom's virtual copies? Do you get to select which copy the preview is generated by or are there multiple previews embedded?

I've read and viewed videos on using virtual copies in Lightroom and it is a concept that appeals to me but I don't see how you could take advantage of that capability from PSU. In other words, I like the idea of being able to develop my raw files into several different versions and just save the settings as opposed to creating separate files for each, but, if I were to do that in Lightroom, I'm guessing that PSU would not be aware of those different copies so I wouldn't be able to take advantage of that functionality.

I guess what I thinking is that I really like the concept of virtual copies versus separate versions but I don't see anyway to take advantage of that functionality from within PSU. On the contrary, if I want to use PSU to create collections and to share images, I would have to create multiple files to do so even if I've already created multiple virtual copies in Lightroom. That seems to defeat the purpose of virtual copies and it's why I assumed that you would just use Lightroom to create collections and upload or share your work.
Tom Stoddard
Top

Hi Tom - yes.. I don't believe the virutal copies would be of use in this workflow... the virtual data LR might write out to the image XMP block.. but only a single preview can be written to the DNG file and thus viewed in Idi. It really is a tough balance between the 2 programs and as more and more functionality is delivered in LR, I am finding it difficult to not do with the export/versioning route if I wish to continue using LR and a separate DAM program.... its a tough call!
Check out our detailed DAM reviews at http://www.DAMRoundup.com
Custom designed books for publication or personal enjoyment - http://www.JingotheCat.com
Top
Post Reply
25 posts