This isn't really ready, but I'm posting anyway in response to Andy's question in another thread about my custom thumbs script.

In concept - I wanted to do as much as I could of this suggestion using only capabilities which are currently available in PSu. Here's how I'm approaching it.

VUTs
Rather than "placeholders" I want to set "Version Usage Tags" ("VUT"s) which define which Managed Versions are intended for which purposes.

VUTs need to be specific to files, and not shared across Version Sets. I can only see one way to do this with current PSu capabilities: Custom Input Fields. There is one field defined for each VUT. The idea is that I put a value of "Y" in the field if that VUT is assigned to that file.

At present my VUTs are defined in the following Custom Input Fields: It's easy to search for (say) those with the Camera VUT by a text search for Y@xmp.icd.QV2Camera.

I use a custom thumbs script to see which files have which VUTs attached. 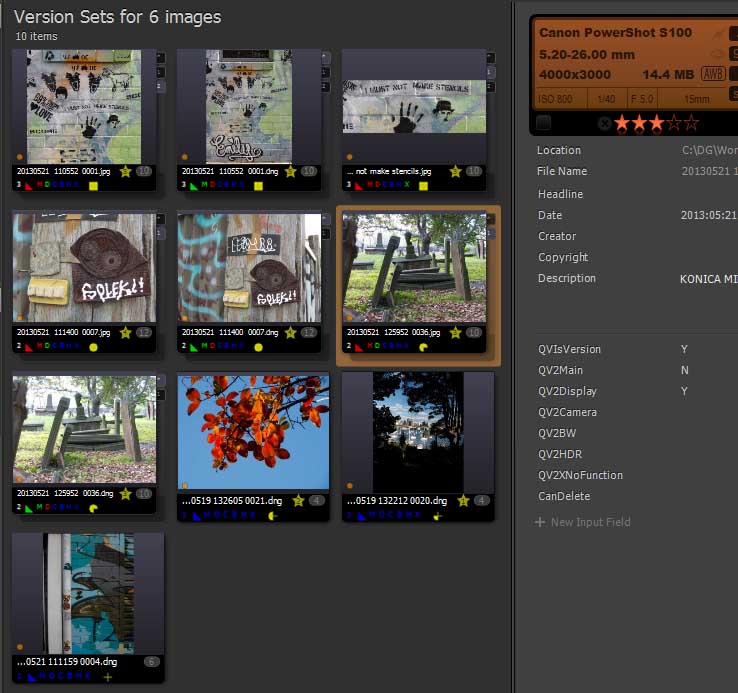 In the thumbnail custom info line, working from left to right:
1. The number shows how many versions there are in total (including Main). The number is shown in blue if it's 1, otherwise it's white.
2. The triangle is blue for unversioned, Green for PSu's designated Main, Red for other Managed Versions.
(This means that if my designation of "Main VUT" agrees with PSu's system designation of Main Version, then the triangle and the following M are the same colour.)
3. Then the VUTs are indicated by their initial letters. If the value "Y" is set in the corresponding custom input field, this letter will be shown in green. If the value "N" is set, the letter is shown in red. Otherwise, it's in blue.
(M for Main VUT, D for Display, etc)
4. Then the star ratings indicator - I'm trying to find something compact and easy to recognise at a glance. 1 quadrant = 1 star, 2 quadrants = 2 stars, etc, and if it's 5 star then fill in the whole square. The example has 6 images rated in descending order from 5 to 0. (I have turned on the tweak that keeps ratings synchronised across a Version Set.)

I'm still trying to figure out whether this really works and is worth the effort. I think so, but there are still some complications to sort out.

Here's the code for the custom thumbs info. It takes a noticeable amount of time to update, but not enough to be a problem at the moment.

Thanks David - that is a very interesting solution and approach... you mention the data takes a noticeable amount of time to update and that has been my experience with custom thumb info as well - I had some many icons and thumb details that it took too long to redraw the screen upon scrolling and I have since turned it off - a real shame because that has always been something of an idi strength and something I use quite heavily to easily and quickly see details at a glance.

I like your clean icon / color/ letter approach.. nice work and thanks again for sharing!
Check out our detailed DAM reviews at http://www.DAMRoundup.com
Custom designed books for publication or personal enjoyment - http://www.JingotheCat.com
Top

As an indication of the time taken for refreshing the thumbs script ... it's on the order of 4 seconds for a (worst case for me) new screen full of about 200 thumbs. But normally I have 20-30 thumbs on a screen so it's not a problem.
That's with Win7 64bit on an i7 running at 2.10GHz - there are 4 dual-thread cores but judging by the resources monitor, I guess only one thread is used for this operation. Or maybe the database queries are slower disk operations; I didn't check disk use. I have the database on an internal SSD so that would still be a relatively fast operation compared to (say) my previous PC.
Top

The question is; when did Andy hit these custom script performance issues. If I remember well, that was at the end of the beta (Andy was ine of the beta testers). He had speed issues when using SVG path images.
In the mean time this is all completely optimized for performance.
This is a User-to-User forum which means that users post questions here for other users.
Feature requests, change suggestions, or bugs can be logged in the ticketing system
Top

Thanks Hert - I believe you are correct and if I did have it still active after beta - it was for a very early release version... if the SVG routines have been optimized since, I have not tried them but will now... Many thx for the info about optimization!
Check out our detailed DAM reviews at http://www.DAMRoundup.com
Custom designed books for publication or personal enjoyment - http://www.JingotheCat.com
Top

andy@damroundup.com wrote:it was for a very early release version...

Products evolve Andy... don't assume thing to be the same without verifying first.

This is a User-to-User forum which means that users post questions here for other users.
Feature requests, change suggestions, or bugs can be logged in the ticketing system
Top

If only I had the time to test - seems like I am playing catch-up with many things these days...